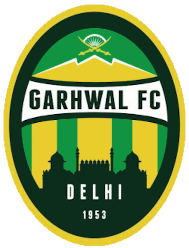 Garhwal Football Club (also known as Garhwal Heroes FC) is an Indian professional football club based in New Delhi. The club lifted the first DSA Senior Division league title in 1986 which became one of the most successful seasons in their history. In 2010, Garhwal FC became the first Delhi based club to enter into the quarter final of Durand Cup, the prestigious and oldest knockout football club tournament in India. They also competed in the I-League 2nd Division.